International correspondents often face harassment and even jail time within many current authoritarian regimes. This phenomenon is nothing new, but it has grown increasingly rampant and spotlighted in countries like Belarus where brave protesters have fought against the fraught election results that re-elected Aleksandr Lukashenko as its president in 2020. Two years later, the ramifications are still at a feverish pace and these intrepid reporters continue to face torture, jail time, and the public faces a blanket-wide independent media blackout. Since protesters clashed with police in mid-August 2020, Lukashenko’s regime has systematically cut off the world from media coverage. “Limited Wi-Fi-Internet is only sporadically available after users install a separate program, while many social media websites are blocked,” as reported by Reuters.

In March 2021, Human Rights Watch reported that the Belarusian authorities had only escalated their repression of international journalists. It has also been documented that journalists have been arbitrarily detained, sometimes beaten, and were “imposed severe fines and prison sentences on politically motivated charges, revoked their media credentials and raided their homes and offices. The crackdown on journalists is part of the government’s efforts to silence media reporting on human rights violations and peaceful, countrywide protests [as] protesters have been demanding fair elections and justice for abuses.” Reporters Without Borders also labeled Belarus as the most dangerous country for journalists, “due to the government repression against independent journalists peacefully doing their legitimate work.”

“Violence did not unexpectedly unfold in 2020,” argues Katsiaryna Lozka, a Ph.D. candidate at the Ghent Institute for International & European Studies. “Lukashenko brutally suppressed peaceful demonstrations in the past as well. The regime’s propaganda has worked to demonize the opponents by presenting them as ‘puppets’ of the West or labeling the opposition as ‘heirs of Nazis.’ [The Belarusian strongman] has used the years of partisan resistance in Belarus and the Soviet victory in the Great Patriotic War (World War II) as the basis for a neo-Soviet Belarusian identity. By monopolizing this discourse, he tried to present any attack on his regime as ‘fascist’ with its masterminds from abroad.” As of Sept. 28, 2022, 1335 people in Belarus have been recorded as political prisoners, according to Viasna, a non-governmental organization.

As part of the Polish Film Festival in Gdynia, Mara Tamkovich premiered her movie short entitled, Na żywo [Live]. In the thirteen-minute film, the former Euroradio journalist and presenter carefully recreated the pressures of broadcasting the dangerous protests from an apartment just near the demonstrations. Always monitored by a police drone overhead that impedes the two young journalists’ feed, it is set in November 2020. Na żywo is based on Katsiaryna Andreeva and Darya Chultsova’s series of events, which led to their arrest, but in the film, Tamkovich uses new names. While fictional, the film also interweaves excerpts from Katya Andreeva and Darya Chultsova’s Change Square Belsat broadcast that happened on November 15, 2020. In this event, protesters gathered to mark the death of demonstrator Raman Bandarenka who was beaten to death three days prior. In July 2022, the 28-year-old Andreeva was found guilty of “state treason” and sentenced to eight years and three months, having already served a two-year prison for the previous conviction (which is what is depicted in the film). At the time of their arrest, investigators charged that Andreeva and Chultsova coordinated protesters, called for further actions, and charged them with “organization and preparation of actions that grossly violate public order.”

“It’s very important that the viewer understands that the spirit of what is happening in the film is true, but it is still a fictional film,” Tamkovich exclusively tells CEA Magazine. “No one knows exactly what was happening during the live stream – and to what Katya and Dasha felt or what they were talking about. I’ve taken what we know now, condensed these events, and modified them to hold as part of the narrative structure. I combined them with my vision of what being in this situation might feel like life for the characters. My intention in this film was not to communicate through facts; I’ll leave that to journalists. I wanted to make the audience feel all the impossible choices and sacrifices those two girls would have made – and by thousands of other [investigative reporters]. It is not a documentary. It is a fictional film and without the comfort of being fully made up.”

Tamkovich, who was born in Minsk, lives and makes her films in Warsaw as she is a graduate of the famed Warsaw Film School and Wajda School & Studio. Prior to making films, she was a reporter and news presenter at European Radio for Belarus and the TV station, Belsat. Her short film, Daughter, won an award at the 25th Minsk International Film Festival in 2018. In that film, Tamkovich depicted how a father must cope with seeing his daughter being bloody and unconscious on her birthday. For her efforts, Tamkovich also won the Cineuropa Audience Award for Best Short Film.

Following the premiere of Na żywo at the Polish Film Festival, Tamkovich spoke exclusively with CEA Magazine. She argues that the film should be shown widely and can best be served to highlight the need for artistic expression in Belarus as well as to display the bravery of those seeking a free and democratic Belarus.

CEA: How old are most of those unjustly imprisoned currently in Belarus because of the demonstrations? What is Lukashenko’s excuse for using groups like OMON, the riot police which has roughed up many protesters?

Mara Tamkovich: I know a lot of cases of imprisonment of people in their twenties. Katya Andreeva and Dasha Chultsova belong to that group. But the protests in 2020 were not student protests. When you watch the footage from the streets in Belarus during the protests, you see a lot of young people. It feels natural, and they usually are highly active in citizen protests in other countries as well. But you also can see families with kids, hipster-looking big-city professionals in their thirties, and workers in their fifties.

I took part in the protest in 2006 and worked on the 2010 elections as an independent journalist. I can honestly say that the 2020 protest did not have a precise demographic [as] it united Belarusians of different ages and backgrounds. As for OMON, it does not seem like Lukashenko needed any excuse to use them as [fabricated] stories that protesters were just thugs [perpetrated] by the West. We’ve lived without any respect for our rights for so long, it is hard to remember that one needs a reason to use force against you.

CEA: Did you intend for Na żywo to use a cinema verité approach all the way through? In your estimation, would a film like this work for over ninety minutes? Did you study other documentaries, which concern related topics?

MT: In production, especially in short films with a limited budget, it is always partly your artistic vision, and partly the limitations you have that enforce the way you tell your story. It is not necessarily a bad thing. In that case, I knew I had no space to stage the protests, so I’ve chosen to use the real ones, which has only, in my opinion, strengthened the message. I am far from being the first to use that kind of method. If you ask about inspiration, I was looking for it in feature films, rather than in documentaries. Films with few cuts emphasize the choice you must make of what you are showing and when, as you do not have the comfort the classic coverage gives you. Birdman by Alejandro G. Iñárritu and Tribe by  Myrosław Słaboszpycki are the first titles that come to mind.

CEA: What specific pieces of advice did you remind your actors in the film in recreating this event? If you’d reveal a bit, what editing tricks did you employ to cut from within the action of the apartment to the real live footage?

MT: Well, the protest is outside, and we only sink into it through the computer. The first time we see it, the camera is filming the screen of the computer, and there is no hidden cut. The second time we jump to full screen is with the protest footage, it absorbs us fully, as it absorbed the journalists in the room. We are then knocked back to the action in the apartment at the same time. Here I must send much appreciation to Katarzyna Leśniak, who edited the film, as she was very courageous during the entire process. In my opinion, she’s done a marvelous job with difficult material.

The second person I must mention is Joanna Napieralska and her sound team. Thanks to their work, you can experience what is happening around the apartment without seeing it. As for the actors, the first and hardest task was for them to go through the full action at one time. It required great concentration to be precise in the choreography we’ve worked out, but also to be able to go with the flow of their emotions.

CEA: What’s the biggest takeaway you want your viewers to have, and how can independent journalism ever flourish in an autocratic state like Belarus?

MT: It’s either one or another, I think. The time when independent journalism will flourish will be the end of an autocratic Belarus. I want the viewers to see real people and their tragedies besides every line of horrible news we get. I know it is not possible to feel for everyone, but I hope this film will make it harder to treat all those reports about political prisoners in Belarus just as a part of “info background.”

CEA: As a filmmaker and journalist, what and who are your greatest inspirations?

MT: My dad, Aliaksandr Tamkovich, was an independent journalist in Belarus, so I was born into it. [Slain Russian reporter and writer] Anna Politkovskaya was my hero when I started as a journalist – and she still is. So is every person who dares to keep idealistic thinking within this practical and cynical world and is ready to stand by it and pay the price. In this way, Katerina Andreeva, Darya Chultsova, Iryna Slaunikava, Uladzimir Mackievich, and more than 1500 others who are currently in jail for political reasons in Belarus are my sources of strength and inspiration.

CEA: Have you had to endure anything that Andreeva and Chultsova went through?

CEA: What are your hopes for Na żywo? Will you keep going the film festival route or will you use it as a visual guide of sorts for aspiring journalism students?

MT: I hope it will be seen by as many viewers as possible because every screening will give me a chance to speak about what is happening with Katya Andreeva, who remains in prison for a prolonged sentence of 8 years and 3 months. I don’t think it can be used as a learning tool, but I do believe that films can provoke [critical] thinking – and as a result – real change in people and their lives.

Na żywo will play at the Chicago Film Festival on Oct. 22. Its impact on audiences has already been felt, however. “This short was very moving,” says Katarzyna Papinska, a Warsaw-based Foreigners Legalization Specialist. “Without such [intrepid journalists], no one would know the real situation in Belarus. Protesters and reporters continue to fight against the regime. Perhaps these very people will rule Belarus [one day if and when] Lukashenko is overthrown,” adds Papinska.

Jared Feldschreiber is a freelance reporter and contributor to Central European Affairs Magazine. He is based in Warsaw, Poland, and often chronicles literary figures, filmmakers, and dissidents in nascent democracies. Reckless Abandon, his novella, is available worldwide.
Twitter: @jmfeldschreiber
Photo credit: Ilan Sherman 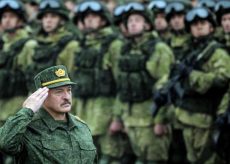