Hungarian democracy 30 years after the transition

Within the framework of “Democracy is Europe”, a pan-European project organised by the Union of European Federalists, Eszter Kirs, Zoltán Fleck, and András Pulai talked about the deteriorating reputation of Hungarian democracy in the EU, shared their views on what has gone wrong since 1989, and discussed the possibility of returning to the European democratic way.

The panelists discussed why Hungary is often labelled as the “black sheep” of the EU. They argued that such accusations are based on the violations against the rule of law, independent media, and the systematic breakdown of the checks and balances. The state of democracy in Hungary is under pressure from illiberal tendencies, which pose serious threats to European democratic values and principles.

“Democracies are being challenged on multiple levels, and the state of democracy is deteriorating on a global level,” argues Zoltán Fleck. In his opinion, we are experiencing a global trend, where democratic institutions, democratic values, and public politics are being infiltrated by illiberal tendencies, which then lead to a more general democratic backsliding. He emphasised the need for a constructive dialogue on the rule of law to overcome these challenges.

To better understand the backsliding, we must highlight the systematic fight of the Hungarian government against a democratic civil society. Eszter Kirs emphasised that the recurring attacks of the Orban regime against civil organisations are inherently against European Law. She points out that even though in some cases the European Court of Justice rules against the wrongdoings of the Hungarian government, the issue of the Hungarian democratic deterioration is more complex. It includes educational segregation, discrimination, and the reduced independence of the judiciary system.

András Pulai conceptualised the situation as the end of the ’happy-days’ of liberal democracies. He pointed out that the eroding independence of the media, the worsening state of parliamentary democracy, and the torn balance of the system of checks and balances are all devastating issues, which are not met by proper international responses.

Despite the strong rhetoric against the Orban government on a European level, the “EU has failed to carry out a meaningful intervention to stop the backsliding in Hungary”, argues Pulai. As democratic values are being violated, European responsibility is growing. But the absence of fundamental steps, and efficient counter-actions from the European Union merely strengthened the assumption that the block in cases like this is all but efficient.

According to Fleck, a genuine political willingness is missing on the EU’s side. He sees Article 7 proceedings, and the new rule-of-law mechanism to be valuable initiatives, but with questionable outcomes. Interestingly, he believes that it is in the EU Member States’ interest to keep Hungary on the periphery. Kirs, on the other hand, values the rulings of the ECJ, and emphasizes domestic responsibility.

How to stop the democratic deterioration?

The panelists agreed that all sanctions should follow a legitimate procedure and following a certain framework that ensures that they do not turn Hungarian citizens against the EU. In this regard, Pulai revealed that statistics show that Hungarian citizens would welcome stronger sanctions, and a more efficient management of the granted sovereignty.

Zoltán Fleck emphasised the need for a constructive dialogue on democracy, involving a new generation of Hungarian youths who had been brought up and socialised under the Orban regime. The involvement of this group is inevitable for a political change. Furthermore, Kirs argued that waiting for help from outside would not solve the domestic problems deeply rooted in structural challenges. The loss of trust in the democratic institutions must be reinstated, and the change must be driven from inside. A consensus between the panelists has shown that civil organisations, activists, and opposition parties must build on the ever-going democratic appetite of the Hungarian citizens.

A general overview of the panelists’ arguments show that the underlying issue of Hungarian democratic deterioration is multi-faceted, and thus it must be addressed on multiple fronts.

The speakers emphasised the need for the creation of a civil consensus behind a new constitution, one that properly reflects social complexity. They have also argued for a rebuilding of civil consciousness through transparent and competitive education. “We have to educate students who are ready for democracy, who respect each other, who understand equality, and who participate in dialogues about their future” expressed Eszter Kirs.

Pulai underlined the importance of “civil courage” in the year to come, to help bring about change in an unfortunate political reality. To return to the democratic way, Zoltán Fleck highlights the importance of unprecedented cooperation between the EU, the remaining democratic institutions, and the political movements. But even this close cooperation would have to face very strong political propaganda, and finding the means of successful political campaigning seems difficult seeing the government’s influence on the mainstream media.

Not all is lost

Despite the above seen trends in the contemporary political environment in Hungary, not all is lost for democracy. Even though a firm stance from the EU is a necessity for a meaningful change to this environment, European efforts must be paralleled with domestic action, and civil courage. The crisis of liberal democracies can only be overcome through educating our youth on European values. The democratic backslide affects all of us, and it is crucial to understand that unprecedented cooperation is required to turn Europe back to the democratic way, and to establish a genuine European civil society.

Balázs Sean Brandt is a Hungarian Politics and International Studies Graduate from the University of Warwick. He specializes in EU foreign policy, transatlantic relations, and geopolitics. He is also the current President of JEF Hungary, where he campaigns for a democratic and federal Europe.
Photo credit: Balázs Sean Brandt 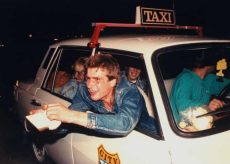 Democracy in Hungary then and now