While Putin’s War on Ukraine has ravaged the entire continent with ramifications for world events for decades, many groups, citizens, and refugees in Poland continue to step up in a big way.

Ukrainians represent the biggest external community living in Poland. Ukraine House, based in the Muranów neighborhood of Warsaw, was formed as a social project with “aims to promote Ukrainian contemporary art in Poland.” It is now one of the main epicenters in assisting refugees displaced by Russia’s war against Ukraine. Volunteers help by the dozens in their sole mission of aiding Ukrainians with stable accommodations and potential gainful employment once they reach Poland.

Iryna G., a volunteer, points me to the website, Ukrainskidom.pl that contains a registration form for Ukrainians fleeing to Poland. Its main purpose is to give refugees adequate accommodations upon getting to Poland. “You need to fill out this registration form if you have already reached Poland. The form is for an apartment,” says Iryna.

While walking around Ukraine House, I meet Artem Vivdych, a resident of the Donetsk region who just happened to be on holiday in Estonia when the war began on Feb. 24. “Estonia was celebrating [its] Independence Day, and on that day exactly, Putin started the war. I was [in Estonia] with my friend; so, we [then] decided to stop here and help in Warsaw,” says Artem.

“I know a lot of NGOs as I’ve been [collaborating] with them for twenty years and have been working with different ministers in Ukraine. I know NGOs, and these guys helped me [in the past]. I was able to reach them and decided to help [those at Ukraine House]”.

Artem knows of these NGOs because for many years he has been working on residential projects in the Donbas region of eastern Ukraine. “We were helping individual persons who were looking for jobs and affected by the conflict. We’ve helped them with pieces of training and providing information,” he claims.

Artem also reinforces that the civil society organizations he has been part of in Donbas — composed of Russian and Ukrainian speakers — have borne positive results. Such initiatives include, “the growing of tomatoes there have enabled [farmers] to sell [vegetables] in Kyiv’s stores. We learned to pack and design them, so that [they can] be sold at supermarkets. We have success stories like these.”

As for Artem’s previous visits to Poland from 2015-2018, “we went for emergency services and to learn from Poland,” he explains. “We were organizing with people who wanted to volunteer as firefighters and how to engage with civil society and businesses to jointly work with authorities in developing their hometowns.”

On March 6, hundreds of protesters congregated at the Palace of Culture and Science in downtown Warsaw to not just demonstrate against Putin’s War in Ukraine, but to demand NATO countries “close the skies,” so no further Russian attacks can happen from the air. It has been rejected by NATO members, especially by the U.S., out of fear of a wider war.

The U.S. also rejected a surprise offer by Poland, a NATO ally, to transfer its Russian-made MiG-29 fighter jets to a U.S. base in Germany “as a way to replenish Ukraine’s air force in its defense against invading Russian forces,” as reported by Reuters. The prospect of flying combat aircraft from NATO territory into a war zone “raises serious concerns for the entire NATO alliance,” the Pentagon said.

For Polina M., who participated in the March 6 demonstration with her mother, cousin, and aunt, her journey to Warsaw from Ukraine has been a long and arduous one. Taking over three and a half days to get to Poland, Polina had to leave behind her husband to fight for his homeland as he is also a medic.

“My husband is still in Kharkiv, and he’s helping doctors and volunteers right now, and I fear for his life,” says Polina. “I want the world to save him – not only him because there are millions of people; children who are dying, who are freezing, who are starving. We need to close the sky over Ukraine, and we need to save them.”

Polina informs that her husband has been assisting surgeons, “supplying them with medical equipment, and [also helping] to evacuate women and children. He needs a specific [piece of] equipment. It’s an external fixation device and a negative pressure wound therapy system. It is very hard to buy them. For all of Ukraine, we need this urgently. I am contacting those in the medical sphere in Poland to help with this.”

In describing her grueling journey, Polina says, “we just headed west, On the first day, we headed from Kharkiv to Dnipro, and we stayed there overnight.” Polina says she slept just eight hours total over four nights. “I was the driver, and on the [second] day, I went from Dnipro to Vinnytsia where we also stayed overnight.”

Polina also remarks that the regional administration building destroyed by Russian shelling on March 1, “was about ten minutes from my parents’ flat. This is the place where I grew up.”

Jared Feldschreiber is a freelance reporter and contributor to Central European Affairs Magazine. He is based in Warsaw, Poland, and often chronicles literary figures, filmmakers, and dissidents in nascent democracies. Reckless Abandon, his novella, is available worldwide.
Twitter: @jmfeldschreiber
Photo credit: Ilan Sherman 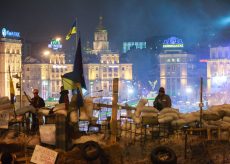