Cullinane: Hungary is one of Biden’s major issues

US-European relations expert Scott Cullinane shares his thoughts on the differences between the Trump and the Biden administrations, the new president’s first international trip leading to the Old Continent, and why Hungary is one of the major policy questions the current US administration will have to tackle in the coming years.

President Joe Biden’s first overseas trip will lead to Europe. The planned visit to the UK and Brussels, set for mid-June, will open up a new page in US-European relations and come as a reflection of the new administration’s desire to focus on the relationship with Americas closest allies.

The goal of the US President’s Europe tour is to highlight the importance of the transatlantic relationship, based on NATO and in close cooperation with the European Union. A new type of dialogue is needed as the historic bonds between the two sides of the Atlantic have loosened up during the Trump administration.

“There will be a change in tone from President Trump’s approach,” Scott Cullinane from the US-Europe Alliance said.

Not only a significant change in tone between the two sides of the Atlantic is foreseeable, but the US administration’s approach to multilateral issues is expected to reach another level. President Biden’s desired return to the JCPOA and the Paris Climate Agreement are some of the major steps that will mark a shift from the Trump era.

The European negotiations will include more immediate tactical issues, like the recent violence in Northern Ireland, and long term strategic topics involving tariffs and trade.

Nevertheless, the discussions are expected to focus on the US-Europe transatlantic alignment and the detection of challenges the Western alliance faces from Russia and China. “Donald Trump’s tariffs and his very strong language on China weren’t entirely wrong, but his administration didn’t win the case for that kind of approach with the Europeans,” Mr Cullinane stated.

“The major goal of Biden’s foreign policy is to secure a common approach between the US and Europe to confront challenges like the aggressive policies coming out of Beijing and to similar extent a common approach towards the Kremlin,” he added.

Hungary in the Western alliance

For many in the State Department, the actions of the Hungarian government in recent years are “worrying”. The Shanghai-based Fudan University’s planned Budapest campus is “especially troubling” for the American leadership after the US-accredited Central European University had been forced to leave the Hungarian capital and relocate to Vienna.

“These are not the actions of a partner and an ally,” the expert argued.

The establishment of the Fudan campus in Budapest provides a bridgehead for Chinese state influence, money, ideology and soft power. “These are things that China has used very aggressively as tools of its statecraft.”

Policy makers in Washington D.C. see an increasing disconnect between the values that Hungary signed up to with EU and NATO accessions, and the actions the Orbán government has been taking. “This issue is going to be one of the major policy questions that president Biden will have to tackle in the coming years,” Mr Cullinane said.

How to manage Viktor Orbán’s illiberalism is a question to which many people in Washington D.C. are trying to provide the adequate answer. Whether this answer should come from within NATO remains contested.

“I’m not sure NATO is the right format to react to the Hungarian government, but NATO is the reason why America must act,” the expert explained.

The military alliance is a “consensus organization”, and not designed as an expulsion mechanism. For this reason, it is becoming more difficult for NATO to have the political cohesion to be effective if member states within the alliance share drastically different values and potentially different interests. “That really demands an American response.”

A “more outspoken” US foreign policy and the introduction of government funded projects across Central Europe, like the re-birth of Radio Free Europe in Hungarian, are very likely. This could happen in the form of increased American funding to civil society organizations and support of local and regional independent media.

With the end of the Cold War, the US started to invest large sums of money in Central and Eastern Europe. Those programs seemed to be successful with many countries from the region joining the EU and NATO. Therefore, USAID offices were shut down and Radio Free Europe closed its language services. “There was a sense that the post-communist transformation had been successful.”

While many accused the US government of being slow to react and trying to find off-ramps not to have to get more engaged in the region and return to USAID programs and radio broadcasting, after several years of negative news from Hungary, the US government decided to activate some of its former projects. Despite criticism by Hungarian prime minister Viktor Orbán and his allies, “these are in no way designed to interfere in the Hungarian elections.”

The programs brought to life are to serve Hungarians, especially those outside Budapest, with access to credible information. “The accusation that guaranteeing access to news is interference is a fundamental misunderstanding of what democracy is,” Mr Cullinane claimed with reference to Mr Orbán.

Hungary as part of a bigger game

Hungary’s case is not only about Viktor Orbán, but the system of democracy. It’s an issue that erodes the foundation of the transatlantic relationship built on shared values. “Obviously the US wants to see this improved for the people of Hungary.”

The same topic the US leadership sees necessary for a strategic alignment between the America and Europe in order to confront China. “This is the great challenge of the 21st century and we can’t do this without Europe.”

“The transatlantic cooperation cannot be successful if governments within the NATO and the EU are heavily influenced by money from China, dirty money from Russia, and that have political interests that run counter to the good functioning of a democracy,” the expert claimed.

With the lack of such foundation, it’s hard to imagine a strategic alignment enduring over decades to come. This is the reason why Hungary matters. “It’s about Hungary, but not only about Hungary.”

Scott Cullinane is an expert in US-European relations with extensive experience working for the US Congress and advocacy organizations. He is the Executive Director of the US-Europe Alliance, a bipartisan non-profit organization founded in 2019 dedicating to mobilizing citizens of the United States to advocate for the enduring strategic and economic alliance between US and Europe.
Photo credit: NSI at the Antonin Scalia Law School at George Mason University 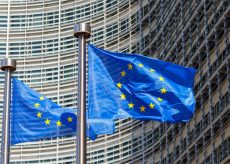 European Strategic Authority in the wake of the US presidential election