Political scientist R. Daniel Kelemen explains how Orbán jumped from the EPP before being pushed out, and why he doubts the Hungarian prime minister would let the opposition win at next year’s parliamentary election. He also talks about what he would recommend President Biden regarding Hungary, and how EU politics could shift with Angela Merkel leaving the stage.

Viktor Orbán and his Fidesz leaving the European People’s Party (EPP) should come as no surprise. The tensions between the Hungarian ruling party and the EPP have been mounting for a longer period with the EPP offering protection for Fidesz for many years.

Not even red lines, set out by the leading European center-right group, have helped. Orbán has ignored them all. However, fights over academic freedom, freedom of press and corruption have been harsh and loud in the relationship between Fidesz and the EPP, none of them doomed the Hungarian party’s fate completely. “It was the direct fights with the EPP leadership”, Mr Kelemen said.

Only with the anti-Juncker billboard campaign across Hungary in 2019, the relations between the two sides started to deteriorate seriously. The last straw came about when fighting over the EU budget at the end of last year, with Hungary threatening to block the agreement and the recovery package due to the rule of law conditionality. The bonds totally broke when MEP Tamás Deutsch made some remarks comparing the group’s German leader, Manfred Weber, to the Gestapo. “That was too much.”

During the Orbán years, Hungary has moved from a pluralist democracy to an electoral autocracy. Some scientists characterize these regimes as ‘competitive authoritarian’, others call them ‘hybrid’.  These systems always maintain the formal institutions of democracy. Elections and a multi-party system are part of them, but they are ‘rigged’ by the ruling party. Opposition forces can be victorious at the local level, like in Budapest or Istanbul, Turkey. But this looks different at the national level. “The playing field is so tilted in the governing party’s favor that winning national elections for the opposition is almost impossible”, Mr Kelemen told.

Uniting the opposition is the best strategy to prevail in authoritarian regimes. Whether it will be the winning recipe in Hungary, is a question to be answered at next year’s parliamentary election. Mr Kelemen doubts the Hungarian PM would let the opposition win. Orbán has centralized control over all previously independent bodies, like the election regulator. “We’ve seen how he uses that to issue bogus fines on opposition parties.”

The political scientist suspects that in the upcoming months moves to further disadvantage the opposition – e.g. through control and manipulation of the media or using the control of the election regulator – can be expected. “It’s hard to believe he is going to let himself lose, given how much control he has and how much is at stake for him,” Mr Kelemen said.

Given the history and the origin of Jobbik, many people were surprised by the fact that the opposition forces have been willing to go into a united coalition with the right-wing party. Jobbik has moderated its stances and tried to reposition itself to the left of Fidesz, but the history of the party is ‘tainted forever’. “At least on the surface they have been successful with their strategy.”

He understands why the broader opposition would include Jobbik, but finds the decision ‘distasteful’. The opposition hopes to dislodge Orbán and to restore the competitive multi-party system thanks to a short-term tactical alliance. “This is one of the things that has helped Fidesz all along, given that one of the opposition parties was so problematic.”

If he happened to be an adviser to the US President, he would suggest that he should speak out in favor of free and fair elections. “He should be giving encouraging words to opposition parties about the importance of pluralism,” Mr Kelemen proposed. Criticism and direct speech would be important for the US government, and Hungary should be labelled as an autocratic regime.

Contrary to the United States, no EU official would admit that Orbán is an autocrat as it would be ‘uncomfortable’ for them. “In that situation, they would just acknowledge their failure to address the issue.” At a distance, the US is in a better position for honest speech.

The future of Fidesz

It’s only a matter of time until Fidesz formally leaves the entire EPP party. “It’s all up in the air right now.”

Orbán’s dream is to form a new coalition to the right of the EPP as he wants to bring together some of the parties of ECR and ID. “I don’t think he can form a new far-right coalition as it’s hard to unite these groups in Europe,” he claimed. “I think he is joining the ECR with Kaczyński and PiS.”

Whether the departure of Fidesz will have an impact on Brussels viewing Hungary? “Fidesz leaving the EPP will not cause a sudden crackdown overnight.” But the rupture between the two sides leaves open the door for tougher action from Brussels on the Orbán regime.

The EPP has changed its position on Fidesz after a series of internal fights and insults. Broader strategic calculations also impacted the decision related to Hungary’s governing party.

Orbán is losing one of his biggest defenders. With German Chancellor Angela Merkel saying goodbye to politics, there is a serious chance that the Green Party could enter the power after this year’s German parliamentary election. “The greens would be much more skeptical regarding the CDU ties with the Orbán regime.”

A series of EPP member parties have been protesting for a Fidesz expulsion from the group for the past two years. The key move arrived with the German CDU and CSU switching their position. “They were the key linchpin still defending Orbán,” Mr Kelemen told CEA.

The EPP will definitely miss Orbán’s numbers as he had one of the largest delegations in the EPP. “But if it was only about Orbán and Fidesz, the EPP wouldn’t have always been so desperate to stick with him.” The bigger concern for the conservatives is that Orbán might succeed and take others like Slovenian prime minister Janez Janša. The EPP didn’t want to leave much space to the right as they were always worried about a bigger, nationalist block emerging at the EU level.

R. Daniel Kelemen is Professor of Political Science and Jean Monnet Chair in European Union Politics at Rutgers University. He previously served as the Director of the Center for European Studies at Rutgers University. He has been a Member of the Institute for Advanced Study at Princeton, visiting fellow in the Program in Law and Public Affairs at Princeton University, a Fulbright Fellow in European Union Studies at the Center for European Policy Studies in Brussels and a visiting fellow at the Center of International Studies at the Woodrow Wilson School of Public and International Affairs at Princeton University. Twitter: @rdanielkelemen
Photo credit: R. Daniel Kelemen 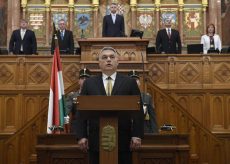 Dalibor Rohac: You either defeat Fidesz in 2022 or might never have democratic election again