HomeDemocracyDemocracy in Hungary then and now
Democracy

Democracy in Hungary then and now

The pan-European project of the Union of European Federalists provided the opportunity to link the revolutionary events from 30 years ago with the current challenges of democracy in Europe. Miklós Haraszti, Éva Judit Kovács, and Nick Thorpe discussed about “How we saw democracy and Europe at the system change in Hungary”.

Those days were undoubtedly optimistic”, says human rights advocate Miklós Haraszti about the transition period. Almost all of the Hungarian voters were pro-Europe and pro-democracy at the first free elections. Back then, the notion of democracy was a liberal one. “It was the world of division of power, rule of law, free election, humanism, and human rights,” he added.

However, things have changed in recent years, Mr Haraszti is sure that the loss of illusion that many Hungarians experience today, will come to an end. “This former communist civilization on the edges of the Western democracy will be again a field of liberal democracy”. These days, Hungary is going through a “low tide democracy” period.

Sociologist Éva Kovács has highlighted the “strong sleeping creativity” in the society. Regarding Europe, the most important claim was to have a passport to be able to leave the country. There was a strong consumption factor in the wish to travel. An example of this was Hungarians shopping en masse on the last official public holiday of November 7th on Mariahilferstraße, Vienna’s major shopping street. “It was not only about bringing in a new fridge, rather symbolically reconquering a terrain that we considered ours,” she says.

Nick Thorpe arrived to Hungary in 1986. The BBC correspondent had a different approach evoking the picture of a girlfriend having a badge with the text: ”Kiss me, I am Hungarian”. For him, this badge symbolically captured the self-consciousness, happiness, and freedom of the people back then. Never since then has this sense of exhilaration been present in Hungary.

He recalled a personal memory from the period, when his first child was born in Hungary. The birth took place at home, which would have been impossible before 1990. This was an important and symbolic even for him. “The revolution was not only against the political system, but the way of thinking”, he claims. Power does not only mean the political leadership, the one-party regime, but the doctors and the lawyers. “Everything was possible back then.”

“It was important to commemorate the 1956 revolution in 1989,” Mr Thorpe says. In Hungarian history, all the revolutions were linked to important changes and 1989 brought a major disruption. It was not a bloody uprising as in Romania or in other Eastern European countries, but it represented the will of the people in Hungary. His book titled “89: The Unfinished Revolution” deals with the events of the transition period.

The sociologist agreed to regard the events of 1989 a revolution. “Revolutions are manifestative as they happen fast in a couple weeks, months, or years,” Ms. Kovács says. At the end of the ‘80s there was a separate important topic, namely self-governance meaning a smaller state and more autonomy. “We wanted a state as small as possible, and more self-governing.” The same freedoms and autonomies are “brutally shrinking” these days.

“It was a revolution in the sense that the system of freedom has been founded and created”, Mr Haraszti explains. The legitimacy, at the time of the transition, was completely changed. This introduced Hungary to the circle of European democracies, a process which was later authenticated by the accession to the Euro-Atlantic integration structures.

Democracy in the center of attention

Democracy was the central topic of the transition period. “There was a lot of talk about legitimacy and democratic rights”, Ms Kovács says. Europe was very present in the daily narrative. “It was almost parodistic how we wanted to see everything European after the long period of suppression.”

In the 1980s, with the Soviet troops still present in the country, Hungarians saw themselves as “democratic enough” and thought Hungary would become like any other Western European country. The “permanent frustration” only arrived later. “The everyday Europe is much more problematic than this imaginary Europe at the time”, she argues.

Young democracies share similar difficulties. Mr Haraszti considers these symptoms “childhood illnesses”. First, political parties have to learn how to fight against each other. The politics of consensus, cooperation, and the protection of democratic interests only emerge later. In Hungary, there were special difficulties in addition. “We blew the election law that favored extensively the majority,” he claims.

Nick Thorpe, for his part, highlighted another mistake at the time of transition. The different parties, in his view, looked at the political power as a cake that had to be divided among these actors. “They totally forgot that democracy was not only about this.”

When talking about current Hungary, Mr Haraszti pointed out the necessity of a proportionate election system. “In a new democracy, it’s important to count with this.” He also raised the difficulties of the modern media system, responsible for creating divisions. “It will be hard to bring different parts of the society together.”

Ms Kovács showed her optimism as a citizen, but not as a sociologist. “The Hungarian society has fallen back to the 19th century.” Many Hungarians want to be modern, civilian, and free, on the other hand, there is a structure promoting the patron-client system. Though, this enables fast decisions, it does not produce the most efficient solutions. “In this familiar structure we have peace and freedom even if it’s a paradoxical one,” she argues.

Eszter Nagy is an economist, and a former diplomat, secretary general of the Hungarian section of the Union of European Federalists, and a member of New Europeans Budapest. She was the presenter and editor of the program EUforia on Hungarian BroadCaster News Station, an independent online radio in Hungary. Twitter: @nagyeszter0213
Photo credit: Eszter Nagy 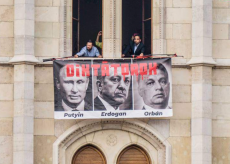 Hungarian democracy 30 years after the transition