Former U.S. Ambassador to Georgia Ian Kelly talks in the Central European Affairs Talk podcast about Russia’s war in Ukraine, Georgia as a prelude to the current crisis, what Vladimir Putin could count on with economic pain kicking in across the globe and whether the Russian President can be defeated in the chess game with the Western world.

Russia’s large-scale invasion of Ukraine has surprised many, but plans for it may not have been developed instantly. On the contrary, preparations most likely had started several years ago with the initial thoughts about a major geopolitical move by the Eurasian behemoth dating back to the period prior to the Russo-Georgian war in 2008. The current Ukrainian crisis shows many similarities between Russia’s actions then and now.

“Georgia’s invasion was to deter the country from joining NATO and to deter Western nations from closer relations with Georgia,” former U.S. Ambassador to Georgia Ian Kelly told the CEA.

“It was also kind of a preparation in a military sense, in that this was really the first invasion by Russian forces really since 1979, the Soviet invasion of Afghanistan. It was a dress rehearsal for Ukraine” he added.

Difference between Syria and Ukraine

A major difference in Ukraine, however, is to detect with Russia’s military intervention in Syria’s civil war. In the Middle Eastern country, the Russian aircraft was able to operate with impunity as the Free Syria forces lacked surface to air missile systems, like S-300, or any kind of modern platforms.

The military superiority in Syria made the Russian air force to be effective in both a military way and in terms of destruction that the Russian armed forces brought on the Syrian population.

For the United States, a major lesson from Russia’s military adventure in the Middle East was that capabilities of the Russian air force were “overestimated”.

Russians face a different environment in Ukraine. “Ukrainians have much better surface to air weapons, and they are much better trained than in the Syrian militia,” the diplomat claims.

“The biggest mistake the Russians made was not making any kind of real accommodations to fighting against a well-trained, high morale defensive force in Ukraine.”

The Ukraine crisis, “probably the greatest security challenged” to the U.S. and Europe since the Cold War, has moved closer the different parties of the Western world, with a unified approach among European nations and the United States on how to approach the conflict in the Eastern European country.

“Ukraine has been receiving a tremendous support in the last three months. You don’t see that kind of consensus when it comes to Syria, Iran, North Korea and China,” Amb. Kelly said.

Western consensus over Ukraine also comes in form of sanctions. Whether the penalties will be enough to defeat Vladimir Putin, is highly unlikely. Western sanctions are important, but Russia’s inability to import high technology items could have a serious impact on the country’s military capabilities.

“We want to see Russia weakened,” U.S. Secretary of Defense Lloyd Austin stated a month ago after his visit to Ukraine. Austin was the first senior U.S. cabinet member to state the intent to weaken Russia’s military.

“What Austin is talking about is imposing the kind of costs on their military, on both their forces on the ground and on their ability to project power through air power through cruise missiles,” the retired diplomat claimed.

Vladimir Putin, on the other hand, might be counting on the erosion of Western unity as economic pain arising from the war starts to kick in across the world.

“I don’t know if this is a war tactic of Putin, but Ukraine is unable to export grain, and that’s going to lead to higher food prices and possibly even famine in the developing world. All of these factors, I think, are going to contribute to trying to accommodate Putin in some way.”

Although in 2014, the U.S. and Europe imposed sanctions on Russia for the annexation of Crimea, Germany signed the Nord Stream 2 gas pipeline agreement with Russia a year later.

Amb. Ian Crawford Kelly is a former diplomat who served as the United States Ambassador to Georgia from 2015 to 2018. Previously, he had served as the U.S. Ambassador to the Organization for Security and Cooperation in Europe (OSCE) from 2010 to 2013. He was the U.S. State Department spokesman under Secretary Hillary Clinton. Currently, he is professor in residence at Northwestern University in Evanston, Illinois. 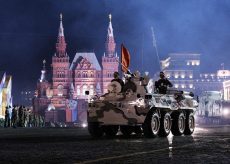 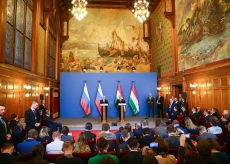