HomeCorruptionZoltán Szotyori-Lázár: Corruption has become part of the system in Hungary
Corruption

Zoltán Szotyori-Lázár: Corruption has become part of the system in Hungary

Every year the Berlin headquarters of the international corruption research institute Transparency International (TI ) publishes the world’s most comprehensive corruption survey, the Corruption Perceptions Index (CPI). In 2019, Hungary scored 44 points on a scale ranging from 0 points (the most corrupt country) to 100 points (the country the least infected with corruption), ranking 70th in a survey of 180 countries, tied with Romania.

Compared to the previous survey in 2018, Hungary’s resilience to corruption has deteriorated by two points and six places, according to the assessments of business people and experts interviewed in the surveys underlying the Corruption Perceptions Index. While Hungary can be considered moderately corrupt in the world, it is perceived as one of the most corrupt member states of the European Union. With 44 points in 2019, Hungary finished last among both the V4 countries and the member states that joined the European Union in 2004, and ahead of Bulgaria alone, and it proved to be the second most corrupt country in the European Union in a tie with Romania.

The report concludes that corruption has become extremely centralized in Hungary over the past decade.

The essence of the current domestic state corruption is the redistribution of economic resources by various means, the creation of a new elite and the rewarding and positioning of actors close to the government. From certain groups, the state takes or buys property by legal means, which is given to other groups. All this often happens in an institutionalized way. Through public money pumps, in violation of the rule of law norms, taxpayers ’money is transformed into private property.

Corruption has become part of the system and not a side effect. In Hungary, a hybrid system between democracy and dictatorship has developed, and from an economic point of view, cronyism has emerged. In some segments of the economy, loyalty overrides the principle of performance. Family members and friends of public figures and public authorities have a much bigger chance to get orders and good jobs. Citizens and economic actors seeking state, government grace are often interested in allowance hunting rather than in demonstrating market performance.

But what does “redistribution of economic resources by various means” mean and how does it work in practice?

Péter Juhász, who was one of the leading figures of the Hungarian democratic opposition a few years ago, made a powerful video report with shocking honesty. Mr Juhász’s name was associated with the discovery and disclosure of dubious economic transactions in connection with Antal Rogán, one of the most influential members of the Orbán government. In the video report, the former mayor of Kengyel, Szilárd Nagy, explains to Juhász how the state-municipal corruption mechanism of the Fidesz government works up close.

It cannot be said for sure that the story told by Mr Nagy works the same for all pro-government MPs and small towns, but the case of Roland Mengyi, a former Fidesz MP in prison, shows many similarities to István Boldog’s methods.

István Boldog has been a Fidesz Member of Parliament since 2010 from the constituency of Jász-Nagykun-Szolnok County, as is the village of Mr Nagy, Kengyel. The hamlet applied for several developments through the Territorial and Settlement Development Operational Program (TOP), an EU support program.

Neither Mr Nagy, who gave the interview, can be seen as spotless: The 41-year-old was the mayor of Kengyel for nine years, between 2010 and 2019, and enjoyed the support of Fidesz most of the time. In the 2014 municipal elections, he won nearly 94 per cent of the vote. But even such popularity could not save him. Last year, the Kengyel Village Government deprived him of his post after he was sentenced by the Szolnok District Court to one year in prison, suspended for three years, for signing a contract with a lawyer as mayor, who was then accused of having embezzled HUF 10 million (EUR 28,000) of public money in Kengyel.

Nagy only received a suspended sentence because he cooperated with the Kecskemét and Budapest prosecutor’s offices in the corruption case of István Boldog and helped to reveal how the system to defraud EU money works in today’s Hungary. Mr Nagy talked about this system in the interview in question.

Mr Boldog’s method was the following: he appeared in town and said that he could help the municipality win the applications, but in return several more applications had to be submitted. Some that Kengyel didn’t really need, but for these tenders Mr Boldog determined who would write the tender, who would be the project manager, who would communicate, and of course, who would execute the project.

The investments were overpriced by about double, so about half of the amount won flowed back directly into Mr Boldog’s pocket. From the money obtained via the tender, the municipality then issued a public procurement, which was also attended by some friendly companies, who had to make unfavorable bids, so the selected company’s bid could prove to be the best, and so it won the public procurement. If mayors did not participate in the game, Mr Boldog through his contacts organized that their municipality only receive a fraction of the original application amounts.

The method was not very complicated, but it required a complete criminal organization to operate, with senior administrative officials, engineers, construction contractors, and so on. Nor is it entirely clear where the money obtained from corruption crimes has flowed.

To a foreign bank account, to companies operating as money launderers, or maybe to a party cash register? It will be up to the prosecution to find it out later in the investigation.

At the same time, it is a worrying fact that several prosecutors conducting the investigation have since been transferred and that the attorney general of Bács-Kiskun County, supervising the proceedings, has committed suicide under mysterious circumstances.

Presumably, the method described above is not unique. This is also indicated by the words of Péter Juhász, occupying the reporter’s role, who claims to have talked to mayors in many places, in different parts of the country, who told him similar stories.

Unfortunately, this suggests that the Transparency International’s finding, pointing out the systemic state corruption in Hungary, is not exaggerated at all. In Hungary, the systematic misappropriation and private enrichment of subsidies from the European Union is taking place with the knowledge and consent of the ruling party.

Zoltán Szotyori-Lázár is lawyer. He graduated from the Faculty of Law of the University of Miskolc in 2001. Since 2005 he has been working as a lawyer for his own law firm Lázár Ügyvédi Iroda. Between 2014 and 2018, he was representative in the General Assembly in Szolnok. From 2019 to the present he has been a member of the local government’s Audit Committee. He is currently doing a post-graduate course specializing in Compliance Law at the University of Miskolc (Faculty of Law).
He specializes in economic and company law, data protection, as well as auditing and combating public and corporation corruption.
Photo credit: Zoltán Szotyori-Lázár 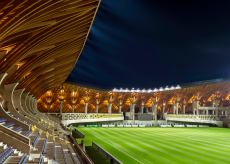